| books, movies, endless ramblings and everything in between |

I gotta admit a sin, I watched the movie before I read the book. I’m guilty of that, yes.

With that being said, here is the book and movie review of Crimes of Grindelwald. I’m going to give my thoughts on the movie first as I watched it first and later on the book. 🙂

Synopsis : In an effort to thwart Grindelwald’s plans of raising pure-blood wizards to rule over all non-magical beings, Albus Dumbledore enlists his former student Newt Scamander, who agrees to help, though he’s unaware of the dangers that lie ahead. Lines are drawn as love and loyalty are tested, even among the truest friends and family, in an increasingly divided wizarding world.

I was very keen to watch this movie after Fantastic Beasts and Where To Find Them. That first movie was fantastic indeed! Crimes of Grindelwald started off so well. It immediately captured my attention, with the amazing cinematography and that little trick Grindelwald had set up for the ministry. It was brilliant. As I went further into the movie, I was very excited, I thought it was really good but what disappoint me was that ending. It got me sitting in the theater frozen in my seat. “So, that’s it?”  was my immediate thought after the movie ended. I felt like the plot was building up to something greater in the movie, but there was a very quick ‘battle’ to save a city and that’s all we got out of the whole movie. And of course that little ending we have about Credence, it just drove me mad.

In my opinion, Crimes of Grindelwald the movie gave us too little information and all it did was introducing more new characters. That’s it. However, it also did make the fans of Harry Potter to wait patiently for the next movie, as I could say that Crimes of Grindelwald was merely a filler for the series but somehow was crucial too because if one missed this movie, he or she wouldn’t know these characters if they appeared in the third movie. I guess again, this is a brilliant move to attract viewers.

Overall, the cast, the cinematography and everything else in the movie was spectacular. But I wanted more from the plot and the ending to be honest. 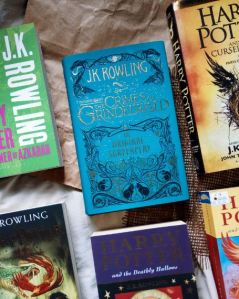 At the end of Fantastic Beasts and Where to Find Them, the powerful Dark wizard Gellert Grindelwald was captured in New York with the help of Newt Scamander. But, making good on his threat, Grindelwald escapes custody and sets about gathering followers, most unsuspecting of his true agenda: to raise pure-blood wizards up to rule over all non-magical beings.

In an effort to thwart Grindelwald’s plans, Albus Dumbledore enlists Newt, his former Hogwarts student, who agrees to help once again, unaware of the dangers that lie ahead. Lines are drawn as love and loyalty are tested, even among the truest friends and family, in an increasingly divided wizarding world.

First of all, many thanks to Pansing for sending me this book in exchange for an honest review. I was very excited to read this screenplay even though many had mentioned the similarity of this book and the movie. That was very much true. The resemblance was there. Everything happened in the book happened in the movie. However, I found it funny that I actually liked this book more than the movie. Despite being so similar with the movie, I found the book more captivating and it felt good to relive the movie scenes through written form.

“DUMBLEDORE: Do you know why I admire you, Newt? More, perhaps, than any man I know? (off NEWT’S surprise) You don’t seek power or popularity. You simply ask, is the thing right in itself? If it is, then I must do it, no matter the cost.”
– J.K. Rowling, Fantastic Beasts: Crimes of Grindelwald

I gotta admit that there were some characters in this book were merely in the book for the sake of being there. But, again, this book is merely a filler and those characters were only meant to be introduced in this book. I hope that in the coming book/movie, these characters would play a more significant role. If that doesn’t happen, then I’m gonna make a whole rant post about these characters’ poor fate.

“NEWT (reminiscently): She has eyes just like a salamander.”
– J.K. Rowling, Fantastic Beasts: Crimes of Grindelwald

Honestly, I don’t have much to say about this book. It’s basically like the movie but better. The illustrations in this book was pretty by the way. 😉 Would I recommend this one, I think it’s really up to individuals. 🙂

Search for what you need here!

Lucca Vudor Sent A Book Reviewer A Pair of Shoes??

Heaven: Have You Ever Got Bullied? || A Book Review

Guess who finally had time to finish reading a book? Yes, it's me. (Finally 😮‍💨)
A lot of hype is going around for this book which is finally published after 7 years of the author's last book, which is Mereka (yet to read).
Hello bookish friends!
I'm just excited about this book. That's all. I think I should finish reading it tonight?
Hello people of Bookstagram. Just wanna say hi and yes, I'm still alive.
[BM caption ahead]